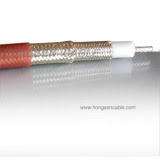 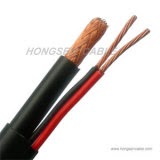 Three types of IF cable in OptiX RTN 600:
IF jumper: connection between IDU and other IF cable.
1/2 inch and RG-8U (1/4 inch) cable: The IF cable provides -48V power for ODU and transmits the IF signal and ODU management signal between IDU and ODU.
Section between ODU and IF jumper.
RG-8U (1/4 inch) cable is used for the distance less than 180 meter.
1/2 inch cable is used for the distance between 180m and 300m.
In communications and electronic engineering, an intermediate frequency (IF) is a frequency to which a carrier frequency is shifted as an intermediate step in transmission or reception. The intermediate frequency is created by mixing the carrier signal with a local oscillator signal in a process called heterodyning, resulting in a signal at the difference or beat frequency. Intermediate frequencies are used in superheterodyne radio receivers, in which an incoming signal is shifted to an IF for amplification before final detection is done. There may be several such stages of intermediate frequency in a superheterodyne, which is called double (or triple) conversion
Intermediate frequencies are used for three general reasons. At very high (gigahertz) frequencies, signal processing circuitry performs poorly. Active devices such as transistors cannot deliver much amplification (gain) without becoming unstable. Ordinary circuits using capacitors and inductors must be replaced with cumbersome high frequency techniques such as striplines and waveguides. So a high frequency signal is converted to a lower IF for processing.
A second reason to use an IF, in receivers that can be tuned to different stations, is to convert the various different frequencies of the stations to a common frequency for processing. It is difficult to build amplifiers, filters, and detectors that can be tuned to different frequencies, but easy to build tunable oscillators. Superheterodyne receivers tune in different stations simply by adjusting the frequency of the local oscillator on the input stage, and all processing after that is done at the same frequency, the IF. Without using an IF, all the complicated filters and detectors in a radio or television would have to be tuned in unison each time the station was changed, as was necessary in the early tuned radio frequency receivers.
But the main reason for using an intermediate frequency is to improve frequency selectivity. In communication circuits, a very common task is to separate out or extract signals or components of a signal that are close together in frequency. This is called filtering. Some examples are, picking up a radio station among several that are close in frequency, or extracting the chrominance subcarrier from a TV signal. With all known filtering techniques the filter's bandwidth increases proportionately with the frequency. So a narrower bandwidth and more selectivity can be achieved by converting the signal to a lower IF and performing the filtering at that frequency.
Perhaps the most commonly used intermediate frequencies are around 455 kHz for AM receivers and 10.7 MHz for FM receivers. However, the intermediate frequency can range from 10–100 MHz. Intermediate frequency (IF) are generated by mixing the RF and LO frequency together to create a lower frequency called IF. Most of the ADC/DAC operates in low sampling rates, so input RF must be mixed down to IF to be processed. Intermediate frequency tends to be lower frequency range compared to the transmitted RF frequency. However, the choices for the IF are most depending on the available components such as mixer, filters, amplifiers and others that can operate at lower frequency. There are other factors involved in deciding the IF frequency, because lower IF is susceptible to noise and higher IF can cause clock jitte


Posted by oladimeji olorunlogbon at 04:31