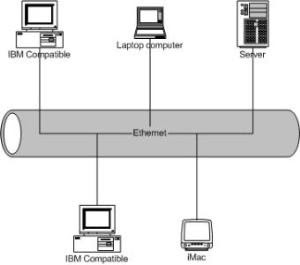 28 = 6/0.666 = 9.0kft
26 = 6/0.51= 11.7kft
24 = 6/0.41= 14.6kft
22= 6/0.32= 19.0 kft
19 = 6/0.21= 28.5 kft
2.3.4 Loading. In many situations it is desirable to extend subscriber loop lengths beyond the limits described in Sections 2.3.2 and 2.3.3. Common methods to attain longer loops without exceeding loss limits are to increase conductor diameter, use amplifiers and/or range extenders,‡ and use inductive loading.
Inductive loading tends to reduce transmission loss on subscriber loops and on other types of voice pairs at the expense of good attenuation-frequency response beyond 3000 Hz. Loading a particular voice-pair loop consists of inserting inductance in series (loading coils) into the loop at fixed intervals. Adding load coils tends to decrease the velocity of propagation and increase the impedance. Loaded cables are coded according to the spacing of the load coils.
Posted by oladimeji olorunlogbon at 22:27